Plot: We follow Michael Parker – deupty intern at the Tupelo Sheriff’s Department through his life on the job.

Okay –  where to start… In the beginning I was annoyed at this book for not having a plot. I was waiting for stuff to happen, for the real plot to being – I wanted the book to kick off. Stuff definitely did happen – there’s an awesome bar fight, there’s a murder, a funeral, but I felt like these were all side plots – and that we were waiting for something else. But it never came. Michael just went about his life and job, and we were always on to something else. 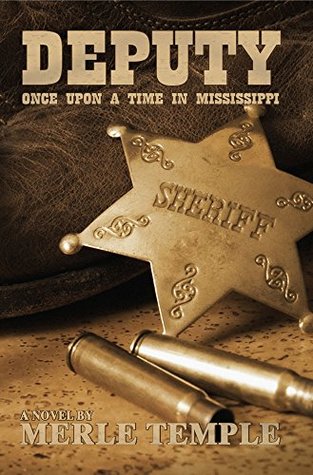 Same with the villains – I thought it was very clear in the beginning who the bad guy was going to be. He did some stuff, he was really nasty, he was laid out so well, perfectly described in all his horror. But then without any warning we’re on to some other guy. Some other criminal doing other crimes. ‘Is this the main baddie then?’ I asked myself. I didn’t mind it, and I certainly don’t demand that a book only has one villian, not at all, it was just that with the first guy it seemed he would be important. And then later we’re on to a third person! The really, really bad one. A truly evil and horrible guy who’s… but then we’re back to number one.

And Michael doesn’t really engage them much. He’s hardly investigating them, and I can’t remember a single time their paths crossed (until maybe later in the book).

But after a while I got used to it. I obviously never intend to go into a book with any sort of presumption of how it’s going to be – but it’s clear that I still do unconsciously. But when I finally got used to it, to the way the plot and story of this book evolved, and the way all the different characters lives intermingled and how it all turned out in the end – I really did appreciate it. The book was also beautifully written, with lots of description and scene-setting, painting a lively and vivid world. Yet not so much that it annoyed me (and if you’ve read some of my other reviews, you know how much it annoys me some times).

I was a bit annoyed however at an overuse of time-settings (is that a word/thing?), especially at the beginning of the book. We were always reminded of what year it was either by current events or songs playing on the radio. And there was a very weird scene with Elvis, which didn’t really seem to lead anywhere, nor have a point. Also – sometimes, this book was so Southern it hurt.

I should also mention, that I’m not particularly fascinated with mobster stuff – it’s not something I seek out, though I’m not saying I hate it – yet I really liked this.

So if you want a Southern, dirty, raw, honest crime novel about how Michael Parker survived his internship as a deputy at Tupelo Sheriff’s Department – I recommend this.

Check out Merle Temple and his book here!