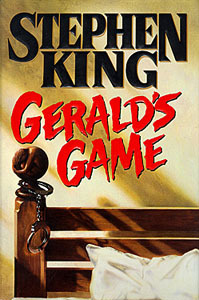 In many ways this is the scariest King book I’ve ever read.

The plot of Gerald’s Game is simple: Jessie and Gerald Burlingame go away for the weekend to their cabin in the woods. During some raunchy foreplay where Jessie gets handcuffed to the bed, Gerald dies from a heart attack. You know how it is – a typical Saturday afternoon. Oh, and if that wasn’t bad enough, the keys to the handcuffs are just out of reach, along with Jessie’s phone, her neighbors, and anyone who could possible save her. Cue Jessie realizing that she’s going to die in her own bed, if she can’t figure out how to get out of the cuffs.

This is the beauty of this story and why I think it’s much scarier than many of King’s other books – the fear comes from that slow spiral toward certain death. It’s not an external force, no spectral horrors, no vampires or walking dead, just Jessie’s mind slowly pulling her under.

And what a pull it is.

I like King. After reading probably a dozen of his books, I know what I can expect and I look forward to it – but, I still think they’re too long half of the time. That’s not the case with Gerald’s Game, not because it’s particularly short, but because it has an uncharacteristically fast pace. Everything is set in motion from page one and we get the ball rolling pretty fast. Even with a sprinkle of backstory and what it was like for Jessie when she was younger, the story is still constantly rolling forward. We never stop – not even once – until it’s over.

A slow spiral toward certain death

Unfortunately, I read a translated version of this book – in Norwegian – because it was given to me by someone and I knew I wanted to read it. I figured I’d just have to suck it up and read it in Norwegian. I HATE reading translated books. Even if the story is the same, you lose so much nuance, so much voice, it’s terrible. Perhaps particularly terrible when you know the author from before. You expect a certain type of writing, and there’s so much that just doesn’t carry over.

Also, Mike Flanagan’s movie based on this is brilliant. I saw that a few years ago, and I got to say, he nailed it. Yet, the book still managed to surprise and frighten me, even when I know for the most part what was coming.

Anyway – Gerald’s Game is fantastic, if you’re looking for something a bit different than King’s regular stuff. There’s nothing supernatural here, no child with superpowers or strange dark things fluttering around in the night. It’s quite refreshing. It was good to read another King book again.

If you like psychological thrillers and horror, I’d like to ask you to check out my upcoming book, At The Gate, releasing September 6. It’s terrifying, thrilling, and heart-breaking, and it’s guaranteed to leave a chill down your book.