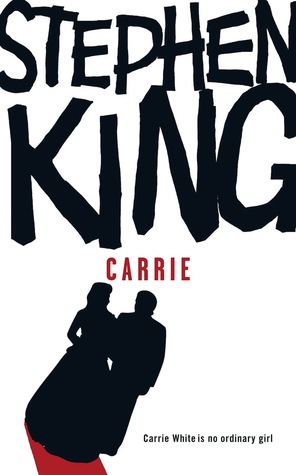 Right, I’m not going to tell you what this is about. If you don’t know it you must have been living under a rock, Google is your friend. In short, Carrie a girl with telekinetic powers gets bullied at school, drenched in pig’s blood, unleashes hell.

I’m very happy to see that King is able to write shorter things (so far the only other thing I’ve read by him is the Dark Tower series and though it’s amazing, it’s incredibly long). This is around 70k words I’ve heard, and it’s awesome. One of the things that sets King apart as a genius writer, in my opinion, is his ability to not drone on. Even when he writes his 500+ page stuff, the pacing is quite fast, and you get a sense of the plot developing very quickly. He has this ability to write a lot about the small stuff, and bursh over the big things, which I appreciate. This is exactly the same, we hit the ground running and King has us hooked from the beginning. Carrie is a good example of how you can spoil what’s going to happen while still keeping the reader interested, because King tells us that Carrie is telekinetic on pages 1 or 2, and still, you want to carry on.

I don’t care too much about the formatting of this book however, and the way King has written parts of it. For some reason he takes the liberty to capitalize Random words (see how annoying That is?) and he has this stream of consciousness in parenthesis throughout the book. I assumed these were Carrie’s thoughts, but it’s never actually specified, and for parts of it you could tell it wasn’t. Also, those thoughts are formatted to be on a separate line from the rest of the book, which makes it confusing to read. I would have much preferred to read it like this (because this doesn’t break my concentration) whereas, this
(see again how annoying this is?)
kind of does, and I have to read a lot of these things multiple times to understand what was going on.

Most surprising of all was perhaps that I didn’t know how it would end. Like I said to begin with, if you haven’t heard about this book, you must have lived your whole life under a rock (which sounds amazing, don’t get me wrong, rock are awesome), but I thought all of the pig’s blood and the prom night and everything was the end. Well, it isn’t. That’s just over halfway through the book. I didn’t know how it ended at all, which was great. Surprising, but great.

One thing that got me thinking though, and actually made me go double-check as I got to the end, is that this is in fact sold and marketed as ‘horror’. I made a thread on Twitter after reading this, wondering what people’s scariest reads were, because this to me isn’t horror. There’s nothing scary or terrifying about it at all. It’s a supernatural thriller, sure, but horror? I don’t see it. A lot of people on Twitter mentioned other King books like The Shining, IT, and Pet Semetary, and I have IT lying around, so we’ll see if that’s scarier. Thinking back, I don’t think I’ve read many horror books (which is Weird because I love horror Movies), so I’m going to make an effort to put more on my list. All the time I’ve spent reviewing books as well, I was never sent any horror books. But I sure hope IT is scarier than this.

A great King book, don’t care too much for the formatting, but I’m happy to have read this, finally.