I want to do something different today. Writing is a lot of fun. I absolutely love it. But it’s really slow. And I can never catch up with all the ideas I have, if I’m going to be able to make any type of quality work out of them. So I decided to do an extra bit of side writing, it’s not much, but it’s something, it’s short and it’s fun. I’ve been collecting these writing prompts for ages, from twitter, facebook, reddit, everywhere. And I decided to put them to use. Starting with this one: 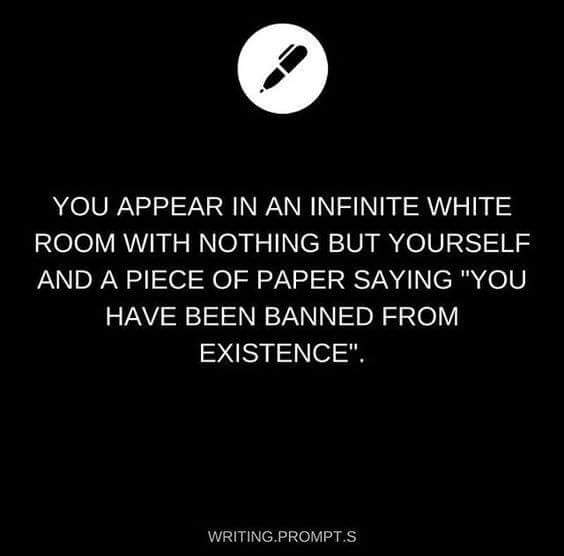 I threw my eyes open and realized I was here again. The white room. Clutching the note in my hand. I didn’t even have to read it – I knew what it said. Same as it always said.

“Daaaaad!” I shouted, expecting the old familiar rumbling sound to greet me. I didn’t hear anything. “Daaad?” Finally I heard him stir.

“Welcome, my child,” he said in that ridiculous, booming voice.

“Cut the shit Dad, it’s me.” I heard him cough, clearing his throat, as he always had to do when he did the voice.

“Andy? What are you doing here?”

I paced back and forth as I always did when I was in there, looking up. I don’t know why I kept looking up, I know my father wasn’t up there, but that’s where the voice came from.

“What do you think? Uncle banned me again.”

“Really?” I could hear my father sigh. “Again? What did you do now?”

“Nothing! I fucking swear, he’s just being an asshole.”

“Don’t you call my brother an asshole. He’s done many great things for this world,” father said, more to himself than me.

“Well, if someone else dared talk back to him, maybe I wouldn’t have to…” I muttered.

“What was that Andy?”

“Nothing Dad, nothing. Can you speak to him? Get him to put me back? I wasn’t done.”

“I swear Andy, one of these days, you’re not going to be able to just be put back up there. What was it you did?” My father’s voice boomed through the white space.

“I don’t believe that, not for a second. Why can’t you be more like your cousin, he’s never been banned?”

“My cousin? Cousin Jesus? He did one little miracle 2000 years ago, and has never had to work a day in his life since. At least I’m there, on the playing field, every single day, working my ass off!”

“Now, now, don’t bad-mouth your cousin. He had to deal with his share of stuff too, you know that.”

“Suppose I do,” I kicked at the white floor. “So are you going to ask him, or do I have to ring up old Uncle God myself?”

“Stop fussing Andy. I’ll talk to him. When you tell me what you did.”

“Come on now. Are you embarrassed?”

“No. I did nothing! Uncle is just being mean. For once, I’ve actually been doing very good.”

“Andy, tell me what happened.”

“Andy T. Christ, you tell me what you did right this second, or I swear by my Brother, I will put you in house arrest for the rest of the millenium, just like your sister.”

I hated when he got like that. Thinking he ruled half the planet, just because his brother is God.

“Where you a terrorist again? Please don’t tell me you did something that stupid! Was it a natural disaster? Andy, what did you do?”

“Nothing… Like I said, I’ve been doing well… I’m a president this time.”