So it’s time for another review! In the past I’ve used to have a little spoiler warning, but I’ve started to slowly phase them out. The reason is that it’s getting increasingly hard to write anything substantial about a book without writing what it’s about. Of course I never intend to spoil anything major, but I have to say something. Personally I don’t mind spoilers, but I respect that you might, so I try to keep within resonable limits.

Onikymn Crystal – this certainly was an adventure and a half. The short story is that Kyle Larson tries to find his way back to his wife who disappears after their honeymoon to Mexico, when she encounters a strange crystal. 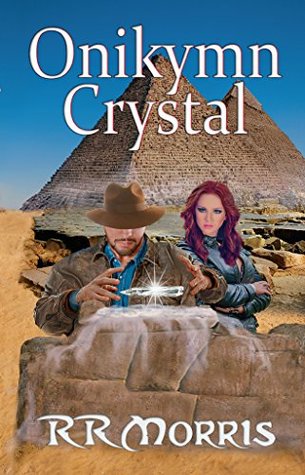 But the long version is sooo much longer and it includes aliens, timetravel, demons, witches, ancient mysteries and more.

18 years after Kyle’s wife Grace disappears, he and his daugther Helen goes back to Mexico. This time, it’s Kyle who disappears. He ends up on another planet, where he encounters the aliens who created the crystals (yes, plural). They created them ages ago, to travel to Earth, and they tell Kyle that his wife is already back on Earth, however, she’s there approximately 20 years before they were even born.

They make Larson a deal, if he can go back to Earth, to intercept another person who’s looking for the last remaining crystal, they’ll send him back to Grace. They give him detailed instruction about who to contact for help, where to be to intercept the antagonist, and how to find and deal with the crystal and set everything right. But first he has to encounter his own self at the point when he and his daugther are on their way to Mexico, to stop that event from happening again.
Therefore, Kyle is sent back to Earth 13 years before he and his daugther leaves for Mexico. He uses this time to study geology, workout, and essentially prepare. He manages to stop himself and his daugther from going to Mexico, and sets out to find his would-be partner – meet Dutch O’Hara – Ex-Navy Seal, Archaeologist, Geologist, and Paleontologist. They start their quest to intercept our antagonist and set everything right, and begin an incredible adventure together.

The story is really great. It’s a proper, hefty adventure, taking us across the world and back, and like I mentioned above, it includes so many amazing things, and it’s like a Sci-Fi/Fantasy/Historical Mystery/Thriller mashed into one big thing. I’d say it’s definitely going to keep you turning pages. There’s also a cheeky bit of romance for those of you who like that.

Did I have any issues with it? Not really, there were a few minor errors that’d you expect to find in every book, and there were a couple of characters that I was surprised by the end weren’t explained in more detail. I only knew them by name, and I sort of figured out/understood who or what they were, but I was expecting a little more depth.
And then, with any kind of adventure this size, there’s a feeling of things being a bit too convenient? I’m not sure if that’s the right way to put it, but there were some timetravelling rules for example that just happened to make everything fit into place, if you know what I mean. But then again, the story wouldn’t work if it didn’t.

The ending was good, though I was hoping it would twist in another direction (got me there!), but I tend to always want that in most of what I read.