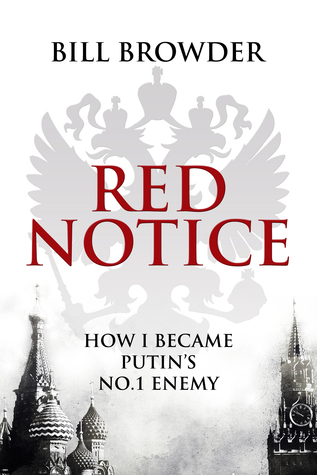 Whoa – what a story!

My father and I have a tendency to read the same books at the same time – without ever knowing about what the other is up to. The last time it happened I came back home to visit, only to realize he had just finished 61 Hours by Lee Child, a book I just read and reviewed not long ago.

While we were talking about it, and how funny it is that we somehow end up doing this — (I guess we have the same taste, I don’t know, maybe we’re related or something) — he asked what I was reading now, and when I said I was just looking for something new, he practically threw this book at me.

“You have to read this! It’s the craziest true story you’ll ever read!”

Looking at the cover and the blurb, seeing it was a book about Russia, economics and what I assumed was a good deal of politics, I wasn’t particularly interested, but I took my dad’s word for it, and brought it home.

This is the true story of how Bill Browder became a millionaire in the wake of the fall of the Soviet Union, and how he ended up becoming a human rights advocate as a direct consequence of his own success. It’s wild, it’s hilarious, it’s heartbreaking and it’s an incredibly powerful story.

It’s kind of threefold. One part of it is Bill’s origin story, how and where he grew up, and how he became the man he was when he first became interested in Russia. That’s the second part: A tale of how he built an economic empire, how he set up his office, his finances and his company, and how he managed to become rich off of a system that hardly anyone knew how functioned in the beginning of the ’90s. The third part, is the sad and terrifying story of the people who tried to stop him, only because he was he better than them, and the story of how he and his friends had to flee.

I’d recommend this book to everyone, even if you like me don’t think any of this sounds particularly interesting at first. It’s much more fascinating than you think, it’s a really well-written book, and it’s – again – a very powerful story.

I’m glad my dad convinced me to read this. I’m going to keep following his suggestions whenever I’m back home. Our love of reading is one of the few interests we share.

What have you been reading lately? Thrillers, romance, fantasy? Any crazy true stories? Let me know in the comments!