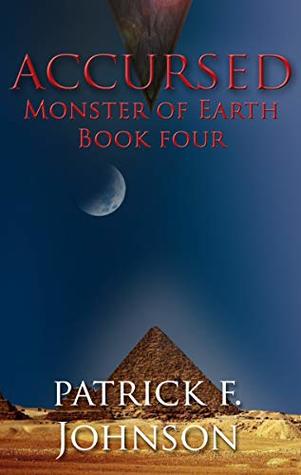 The action-packed sci-fi adventure is over!

And what a conclusion it is. Through four books we’ve followed Frank Ford – The Custodian, The Angel, The Monster, and now – The Accursed of Earth. It’s been a wild ride across alien planets, meeting with alien races, forming friendships, romantic ties, and rivalries, but most of all it’s been heaps of fun!

I might have mentioned this in earlier reviews – (and maybe even complained a little) but Frank Ford in his transformation to the Custodian of Earth has become immensely powerful. Which makes for some pretty hefty action scenes. Armed to the teeth with Japanese-inspired weaponry – opting for blades instead of using guns or laser rifles – Frank lays waste to most of his enemies, while being protected from harm by a force shield. It’s fun and action-filled, sure, but sometimes I felt like maybe he got away a bit too easy.

Also – and this might be my general taste for shorter books talking, but I feel like sometimes we lose motivation. As if things just happen for a while, without any real sense of why they’re happening. It’s still an exciting sci-fi adventure, but I found myself longing for more urgency and purpose occasionally.

Johnson’s big strength is his world-building though – (as well as his knack for proof-reading. I was reading a traditionally published book alongside this one which was comparatively riddled with errors). The planets and races he’s created are magnificent and they come off as if it’s been done with relative ease as well. It’s been exciting to follow Frank on his journeys throughout space, and if you’re a fan of epic sci-fi action adventures, I’m sure you’ll love it too!