I began doing reviews by request. To help indie authors get the word out there about their books. Recently, I’ve also started reviewing the books I read on my own accord – they’re few and far in between, but I manage to find room for them some how. And for ages now, I’ve wanted to review some of my favorite podcasts.

It all started with Lore. I remember vividly how I came across it – because it was all by coincidence. My wife listens to a lot of podcasts, on and off, maybe just an episode here and there. I’m completely opposite, I’ll only devote time to it if I really, really love it, and if I do, I’m going to listen to all of it.

We were sitting on the couch, reading and surfing the web, when my wife were scrolling through some podcasts on Spotify. I cast a quick glance at her phone, and saw that she scrolled past something called “Lore.” I figured, if there’s a podcast out there for me – that’s going to be it.

It all started as a marketing strategy. Mahnke is an author, like so many other of us, and had written a few books before he made Lore. He made the podcast in an attempt to market and sell his own books (or so I’ve heard, if I’m wrong about this, I apologize), but ended up instead making an incredible fascinating podcast (not that his books aren’t great I’m sure).

I’ve described Lore to friends as historical horror. It’s horrible, terrifying, but best of all – real. Mahnke puts on his historian’s hat, and tell us the most chilling and gruesome stories imaginable – real ones. As an archaeologist, I love anything that has to do with history and the past, and the fact that it’s always horrible make it just so much more interesting. Every episode is about 30 minutes long, and none of them are the same. They’re from all over the world, all through out history, and can be about a person, a place, an object, a building – anything you can imagine. Mahnke is coming close to his 100th episode anniversary, so if you get hooked now, you have a lot of good podcasting in your future. There’s also a Amazon Prime TV series based on the podcast (which I’ve yet to see), as well as a series of books. I’m sure they’re both as good as the podcast.

Then came Cabinet of Curiosities. I had originally planned to review Lore ages ago, but I’m glad I waited. Curiosities is shorter (10-15 minute range), and more frequent (twice a week), and a little bit less horrible. It’s more often than not, just fun fact, a kind of “Did you know that” of historical oddities. Very often it will be about a historical person who’s done something strange or peculiar, where the real identity isn’t revealed until the end of the episode. There’s always two Curiosities per episode, and they’re delightful. 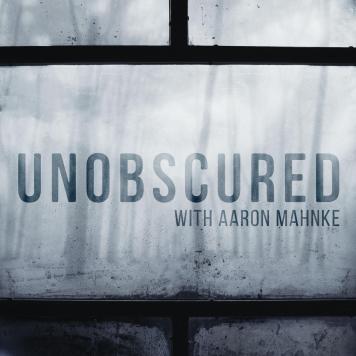 The latest edition to Mahnke’s world of historical storytelling is Obscured. It’s a longer, more detailed version of Lore, where each season focus on one historical topic. The first of which is, The witch trials of Salem. There’s guest commentary by relevant scholars, and it’s a much more in depth look at a case than the Lore episodes, yet just as terrifying. It’s quickly becoming my favorite of Mahnke’s podcasts and I look forward to seeing what future seasons are going to investigate.

Aaron Mahnke is a powerhouse of podcasts and I’m so happy he’s doing what he’s doing. His podcasts make up about 50% of what I regularly listen to, and if you payed attention above, that means a lot. I’m also proud to say I’ve listened to all of it. Not only are the stories he’s telling fantastic, but so is his storytelling. He has a way with words which will leave you fascinated.

You can check out everything Mahnke is up to here, or you can go find him on Twitter and say hi. He loves it when people says hi.